Wise Spending on Landscaping – What to Hire, What to Do Ourselves 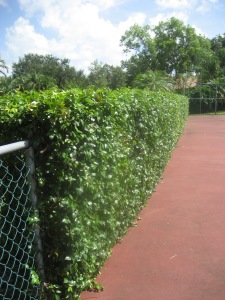 Our home is on nearly 2 acres of land, so there’s a lot of grass. And a lot of hedges.  And lots of flower beds.

Grass that needs to be cut.  And hedges that need to be kept trimmed.  Flower beds and other decorative landscaping that need to be planted and maintained.  We had to decide what we were going to do ourselves, and what – if anything – we would hire someone else to take care of.

Most of the decorative landscaping was already here and just needed a little TLC.   I’ve already written about how I used what I had to reduce my costs on planting the flower beds and a bit of the other decorative stuff, so we’ve obviously decided to do that ourselves.   Hiring a landscaper to do that planting and maintenance would cost us a fortune!  Even though I’ll probably do more planting as the  seasons change, we’ll still save all of the labor costs by doing it ourselves.

It’s not always a good idea, though, to do it yourself.

My father had always paid a service $145 a month to cut the grass, no matter how many times they cut it.  Standard here is twice monthly in winter, three times per month in summer.  Whenever needed, he paid them another $200 to trim the hedges and other landscaping.

When we were talking about the possibility of moving into this house, Husband said he really wanted to cut the grass.  It was one of the the things he enjoyed about his prior home ownership, and he’d missed it since moving to the townhouse (with it’s landscaping taken care of).  He planned to buy a riding mower and an edger, thinking that within 6 months they would have paid for themselves.  Great!

But he hadn’t considered taking care of the other landscaping chores, especially trimming the hedges.  And after much thought and discussion, Husband decided he didn’t want to spend every weekend taking care of the yard.  And I really couldn’t blame him.

So, we decided to keep the landscaper, at least for the time being.  The hedges were trimmed just prior to moving in, so we wouldn’t have to worry about them for a couple of months.

After we moved in I started talking to people about how much they paid to get their grass cut.  Most of the people I spoke to paid about half of what I did – but their yards were much smaller.  Still, it couldn’t hurt to get some quotes.  The first quote I got was less than we were being charged.  A few others were in that same ballpark.  The best deal, though, was from my brother’s well-recommended landscaper, who only wanted $50 per cut.  And since he’ll only cut when we ask for it, we can sometimes wait an extra few days or a week to stretch our landscaping dollar.

So, I spoke to our landscaper about the quotes I’d gotten, and he really didn’t want to come down in price.  That was fine with me – I wasn’t too happy with him anyway.  First, he’d told me that the $145 only covered two cuts per month – NOT what he’d been telling my father (I honestly think he’d been skipping cuts since my Dad moved out, still charging him full price).  On top of a myriad of other issues with him, he’s only cut our yard 4 times since we moved in on May 23rd (and didn’t cut it  at all until I called to ask where he was – more than 3 weeks since the prior cut).   I’d decided to take it up with him when I got the bill…only I’ve never gotten one.  I finally had to call him for the bill, which will be reduced by half, since he should have cut our grass at least 8 times by now.

So, he’s history.  The new landscaper begins this week.   We are still hiring out the grass cutting, but we’re saving money by getting a better deal for the same service.  Issue settled.  We hope.

Since the hedges and other landscaping need to be trimmed every two-three months, it has now become time to make a decision about who is going to trim them.  We decided to forgo a landscaper to do the hedges and buy our own hedge trimmer.  We spent $80 for the trimmer,  which is far less than the $200 per month the old landscaper wanted to charge, and the $150 the new guy quoted.

Husband is out there now, trimming hedges, and enjoying the exercise.  And doing a heck of a job, if I do say so myself.  It’s a great win for us because we are saving a great deal of money, and he gets to do yard work he enjoys without spending every weekend doing it.

4 Responses to “Wise Spending on Landscaping – What to Hire, What to Do Ourselves”