I know, that’s a ridiculous statement to anyone who has an iota of frugality in their body. And in most cases it is ridiculous.

But sometimes we need to think outside the box to get what we really want, and save money in the bargain.

Prime example: I needed a table and chairs for the kitchen in our new home. I considered the size of the kitchen (quite large) and the color of the floors (brown ceramic tile – ugh!), and spent some time looking in stores, catalogs and online before I decided I wanted a farmhouse-style table with off white legs and a wood top, plus six chairs. I found one I liked at a local furniture store, and it would have cost $1000. I just didn’t want to spend the money…

So, off to Craigslist I went, and spent a few weeks checking the listings every day. I found a few that I liked, but they were either too small or too expensive. The ones I liked were listed in the $500 – $600 range – too much.

And then I saw a listing with a table and chairs that looked darn near perfect. The catch? They were selling a china hutch with it. I don’t want or need one, and I wasn’t particularly fond of the one being offered. They hadn’t purchased it as a set, and it was a cheap fiberboard piece, likely purchased at K-Mart or Walmart. Just not my cuppa tea. Besides, the only appropriate place for the hutch in the kitchen was already appropriated in my plans to house the pasta table (a lovely butcher block table on wheels that my mother had handed down to me, and that many friends have tried unsuccessfully to buy from me over the years).

So, ick on the hutch.

All of the pieces – the table, leaf, six chairs and the dadgum hutch -were priced at $200. Two hundred dollars!!!!

So, I made an appointment to see it. Naturally.

I knew I wanted the set the moment I walked in. First, the house was immaculate. That tells me that the owners are clean, and took care of the pieces. BIG bonus points. If the house was a pigsty it would be really difficult for me to buy a button, let alone furniture.

Second, the table and chairs were almost exactly what I wanted. Wood top with a leaf (so it could sit 4 or 6), white legs, and six chairs that are sturdy as heck. There were a few things I wasn’t entirely crazy about – the scale of the legs was large compared to the table – not my preference. And the wood top was basically rectangular, but was beveled and curvy. My clean-lines loving self would have preferred a regular old rectangle.

And then there was that hutch. That I didn’t want or need. Or like.

What did I do? I gave her a deposit right there, of course. Then I corralled my best friend (the one silly enough to purchase a pickup truck) to help us pick everything up and drop it off at the new house – and this was before we moved in.

And that night I listed the hutch on Craigslist, and sold it the next day for $75. In retrospect I should have asked for more, based on the number of inquiries I received. Live and learn…

And doesn’t it look nice? 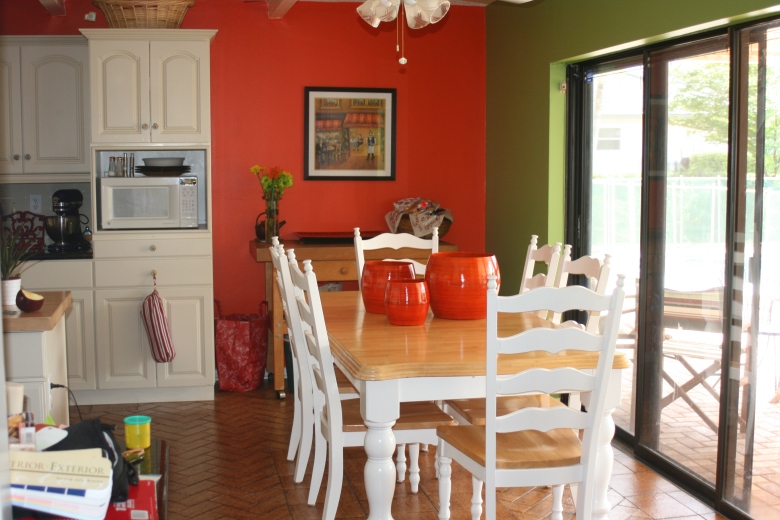 Frugal flops.  We’ve all had them, haven’t we?

I’ve probably had more than my fair share.   Mostly because I love a deal, and I’ve been known to overbuy a time or twelve.  Now that I am packing and reaching into every nook and cranny the sheer numbers of deals purchased and quickly forgotten are embarrassing.  I’ve filled an entire closet at the new house.  And I’m not done yet.

But this latest frugal lemon wasn’t about a deal, or overbuying.  In this case my eagerness and excitement spurred me to make a bad choice…

See, we’ve been planning to move since before Son was born.  As a result I never really decorated Son’s room the way I wanted to- though I wanted to desperately.  But why would I when we were about to move?  His furniture is my pre-marriage master bedroom furniture – whitewashed wicker.  Using the dresser as a changing table was a frugal choice that worked  perfectly well, and placing the full-sized bed in his room so guests would have a place to  sleep wasn’t a pretty choice, but who cared?  We were  moving! I did manage to put some picitures on the wall and an alphabet rug, but it wasn’t the room I’d dreamed to give him.  Not even close.

I chose a really bright green paint for the room, but only put it on 1 wall.  I went to Ikea and chose curtains and accessories and built more new ideas.  With the paint I’ve spent about $100 so far.  Woo hoo!

The furniture in his room now will go in the guest room at the new house, so I decided he needed a new dresser and a desk.  New to us, at least.  So I looked on Craigslist for a wood dresser and desk that I could paint either white or bright green or blue – I hadn’t decided yet.  And I saw something that could be perfect – it had a really nice whimsical shape – and it was only $40 for the dresser AND the desk.  And it came with a headboard with cubbies (which I didn’t need so I was either going to re-sell it or saw off the bottom and hang it on the wall as a shelf).

I went to go see it and was disappointed to see that it wasn’t in great shape.  The headboard was in fine, but the dresser was scratched quite a bit.  The desk had water damage at the bottom (water and fiberboard don’t mix) and the fiberboard top was worn away in one corner.

I hesitated, thinking about all of the work that would need to be done.  Then I said to myself, “Well, the scratches don’t matter because I’m going to sand it before I paint it.  And I can put molding at the bottom of the  desk and just attach some 1/4 inch plywood to the top of the desk and viola!  And it’s only $40 for all three peices!!!”

So, I bought it.  And when Husband saw it he was unhappy.  He said it was crap furniture  and that he’d do the work but not be happy about it.   I saw my vision for it in my head and was undeterred.

But he was right.  It was crap.  And it was going to take soooo much work to have it match my vision.

I began to have buyer’s remorse.  My overexcitement led me to a bad decision.  The furniture was CRAP!  What was I thinking???  It was a frugal lemon so big that it took up half my garage.

I began to think about getting him a good piece of furniture.  Maybe even new.  I looked on Craiglist, I went to Ikea.

And I decided to get rid of the crap.

I still haven’t bought a dresser for Son.  But I’ve calmed down and decided to take my time. There’s no place for emotions in frugality and wise spending.

Not bad at all…

I spent the past two weeks pretty entrenched in family stuff. My Dad is selling his house and buying a condo on the beach. My sisters were in town, so we’ve been furniture shopping and started to sort through some of the stuff in the house, figuring out what he’ll take with him (15%), what my brothers and sisters and I will take (15%) and what will be sold at the massive garage sale we’ll have (we can all figure out this percentage, I hope).

I’ve talked in the past about the mounds and mounds of clutter and crap my stepmother amassed. My Dad lived in a house full of clutter with her for thirty-five years and never complained. The house was always relatively clean, but there was nary a surface unoccupied. And as each of us moved out of the house she took over our rooms and filled the closets and drawers with little gifts she thought the kids would like, or napkins for a future dinner party, or address books (we’ve found at least twenty, filled with the same addresses over and over and over again). There are hundreds of glasses, every kitchen gizmo and gadget you can think of (and some we still have no clue about), family heirlooms and enough serving dishes to give one to every soldier in Iraq. Well, not really. But a LOT.

Now that she’s not there my Dad’s innate need for order (I am an accountant’s daughter) has resurfaced, and with a vengeance. He cannot tolerate any new mess, any new clutter. Extra food brought into the house for the duration of my sisters’ stay is already out of the house, and my sister doesn’t leave until tomorrow. This after noon he asked us to clean up the kids’ toys, about 1/2 hour before more grandkids were showing up. We explained and he relented, but the mess really bothers him.

His new home will be very different from the one he lives in today. The furniture will be less ornate (his new bedroom and dining room sets are lovely and elegant with very clean lines), there will be surfaces uncluttered, and likely there will be empty drawers. To me a much more relaxing place to be.

But that’s not the point.

What’s so fascinating, so wonderful, so cool, is how he adapted for the woman he loved. She brought him so much joy that he learned to live with the clutter, the shopping bags, and the bills. He didn’t try to control the house or her love of stuff. I don’t think he even noticed that much; not until she was gone.

We all deserve to be loved like that, don’t we?

Am I Getting Smaller or Is Furniture Getting Bigger?

Yesterday I went shopping with my Dad for some furniture he needs for his new condo. As we went from faux bedroom to faux dining room to faux living room in several different stores I was struck by one thing almost all of the furniture had in common: it’s MASSIVE.

Is it about more is better? The bigger my stuff the more successful I am? Does everyone think they need to live royally?

Egads! Not everyone lives in homes with open floor plans and vaulted ceilings. In my house the furniture would look ridiculous; straight out of Alice In Wonderland.

Whatever happened to simple, clean lines? Furniture that’s well-made, comfortable and not king-sized. Where did all the dove-tail joints go? In one store my Dad looked at a bedroom set that was priced at over $10,000 and it was crap. Glued joints, dresser drawers that didn’t sit smoothly in their tracks, dime store hardware.

Who buys this stuff? There’s got to be something out there between Ikea or Shaker styles and this galumpta furniture!

My Dad was not a fan of the huge, ornate pieces, thank goodness. After 36 years of my stepmother just knowing what he liked he finally got to discover his own taste. He found a beautifully simple, elegant dining room table, very similar to my own, priced at $3000.

Three thousand dollars for a dining room table? I was distraught when my son scratched my beloved $200-on-clearance-at-Bombay table. I don’t even want to think about what I’d do after a $3000 table was ruined.

He thought it was well worth it. Not to me. Perhaps I’m so different because I grew up with my Mom, struggling all the time. But I guess that there are many that think $3000 for a dining room table is reasonable; otherwise these places would not stay in business.

I think I’ll stay on my side of the looking glass. Me and my simply-elegant-but-now-scratched-$200-on-clearance-at-Bombay table.